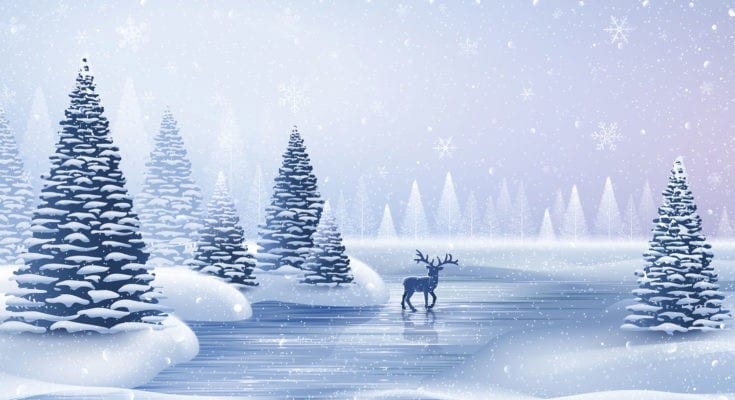 Celebrating the Symbolic Meaning of the Christmas Tree

We had live Christmas trees at my house when I was a kid. Mom sat at the fireplace and gently brought out all the decorations for the tree. She’d dole out the ornaments to my sister and me.

We’d eagerly grab the baubles and run back to the tree to hang them on our branch of choice. To which, my mom inevitably responded: “NO! Not there! You don’t hang an ornament from the garland!” Or, “NO! Not that branch! You’re blocking the view of the Christmas lights in that spot!”

Ah, yes. Mom was, and still is a stickler for the aesthetics of things. Not a thing out of place. I love her for that. Her attention to detail assured a fabulous Christmas tree. Truly, our trees looked the bombadiggitiest every year. And I thank mom to this day for teaching me how to deck a Christmas tree properly. LOL.

When it comes to the symbolic meaning of the Christmas tree, I’m not sure I can say it better than this:

Yep – that pretty much sums up the symbolic meaning of the Christmas tree. Guess I can pack up this post now and say so-long. Just kidding.  There are tons more tree treats to be symbolically savored!

This song (shortened by taking out the “Oh Christmas Tree” chorus lines), was written by Ernst Anschutz in 1820s. Originally written in German, Oh Tannenbaum doesn’t really refer to a Christmas tree per se. Tannenbaum means ‘fir tree’ in German.

The fir tree is one of the most common live trees we haul inside for the holiday. Pine and spruce trees are also popular picks. Whether spruce, cedar, pine or fir – all Christmas trees have one thing in common…they’re all evergreens.

Have you ever wished the noble, ebullient feeling of Christmas could last all year long? Those feelings are everlasting via evergreens. That’s a huge slice of the symbolic pie surrounding Christmas trees. Why? Because evergreens are symbolic of permanence. This theme of immortality and constancy is born from these trees remaining evergreen all year round.

More Symbolism About Symbolic Meaning of the Christmas Tree

Most of these symbolic attributes point directly to the evergreen’s ability to keep its crisp, viridian color all year. The fragrance of evergreens is also a symbolic salute. Science has proven the aroma of pine, fir and cedar is both relaxing and invigorating. Native Americans of North America knew this. For example, the Ojibwas used the essence of pine to revive members of the tribe from unconsciousness or disorientation.

The symbolism of healing is also a nod to Native Americans, who used balsam needles in sweat lodges to alleviate colds and coughs. Across the pond, Northern Europeans laid evergreen branches on pillows to prevent nightmares. And if hung over a barn door, an evergreen bough was reputed to thwart off evil spirits.

Evergreens aren’t just for Christmas. Consider the ancient Celts. Very often, they planted a pine cone at the site of important resting places as a funerary marker. Celts, particularly Druids, held the fir as a symbol for everlasting life. They observed how this tree kept its emerald glory all year, how hardy it was, and also witnessed how long the tree lived. All of these observations made the fir a perfect planting to honor and respect tribal members who had passed into non-physical.

Symbolic Meaning of the
Christmas Tree in History, Myth and Lore

Greeks: The pine tree was sacred to Attis, the Greek god of flora – the plant world. Pine was also sacred Cybel, the earth goddess. In this tradition, Greeks would decorate pine trees with silver adornments and bells. Offerings were placed under the tree as sacrifices to these deities.

Romans: Evergreen trees held big solar symbolism. These trees were a testimony of power and everlasting light to the Romans. During the festival of Saturnalia, Romans decorated evergreens to commemorate the birth of a new year. Saturnalia takes place during the winter solstice. The passing of the solstice marks a time when the days start to get a wee bit longer – a promise of Spring’s return. Hence the symbolism of eternal light – the light of the sun returning to the land.

Teutonic (Celtic): Firs and pines were adorned with gold offerings such as torcs and pieces of jewelry. The idea here is to pay tribute to the deities of life, to assure good harvest, big conquests, and establish the continuation of the tribes.

Christian: The symbolic meaning of the Christmas tree is perhaps best associated with the birth and resurrection of Christ. There are many theories about how exactly the tree got this connection to Christianity. One such theory is from St. Boniface, an eighth-century Christian missionary. He established the fir as a sacred tree among Druidic Germans. He cited how the wood of the fir was a wood of peace. He also pointed out how the evergreen was a symbol of everlasting life – something Christ promises to all people. St. Boniface also observed how the fir, so strong and erect, pointed to heaven, and deemed it the tree of the Christ child. Decorations, especially lights upon the tree were symbolic of every soul saved by Christ.

Norse: The Yggdrasill is often associated with the Christmas tree. This is the tree of life in Norse ideology. Some accounts of this honorable tree tell of lights in the form of candles placed upon the tree branches during the winter solstice. Each light is said to symbolize the sun, moon and stars.

Japan and China: Pine and cypress are sacred trees with symbolism of immortality and longevity. In fact, the wood from these trees is used to build holy structures upon consecrated ground. Temples, altars, city entrance gates and Shinto Kami structures were built from these evergreens. In this tradition, the pine and cypress possess the force of life. Thus, their life-giving energy was powerfully felt at these holy structures.

Whatever belief you subscribe to, one constant about symbolic meaning of the Christmas tree stands out: This is a tree worthy of the celebration of life. Bold, noble, strong and evergreen…these trees are perfect symbols of the elegance and joy felt this time of year.

May all your Christmas trees be meaningful and filled with hope,

Take Away Tips About Symbolic Meaning of the Christmas Tree

Hope is evergreen.
There is a reason Christmas trees are evergreens, like pines and firs. These trees stay green year-round. In the old days, evergreens were brought into homes during the winter solstice to remind them that hope springs eternal. The vibrant color and the fresh scent of evergreens was an inspiration during the harsh, cold winter months.

Nice baubles!
Decorating Christmas trees started with our ancient ancestors. The Celts for example, first decorated trees with golden torcs (bracelets) and other hand-crafted metal pieces. This was an act of offering recognition to the promise of good things to come. Decorating trees was a way to keep hope alive during winter, and anticipate big blessings coming in the spring.

Poinsettias are native to Mexico and Guatemala. It was first introduced to the United States by Joel Poinsett. Joel Poinsett was an American linguist, scientist, horticulturist and also a missionary to Mexico. Get more about poinsettia meaning and history here.

There is a lot more to symbolic mistletoe meaning than just kisses and Christmas decorations. It’s a plant strongly associated with the oak tree, and has powerful links to Celtic culture. Get more about Mistletoe meaning here.