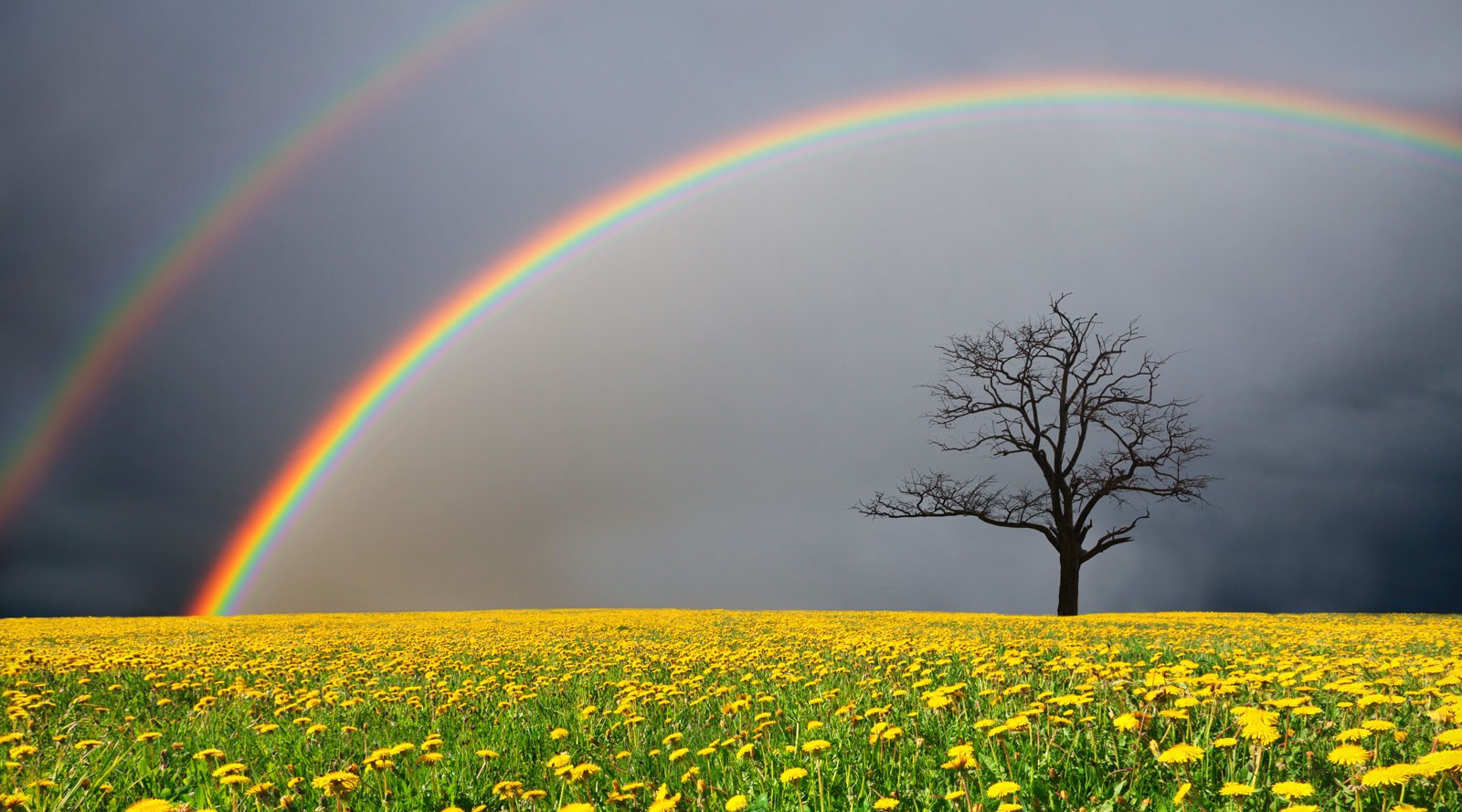 Getting Inspired by the Symbolic Meaning of Rainbows

Most of us already know the legend of gold at the end of the rainbow. This article on symbolic meaning of rainbows explains where that idea came from in cultural history. Also discussed is rainbow meaning in the spiritual sense. If you’re wondering what kind of messages and meanings the rainbow has for you, read on!

I’m more of a skull and crossbones kinda gal over butterflies and rainbows. I don’t do fluffy. Never have. As a girl, I poo-poo’ed those sparkly rainbow stickers stuck on my classmate’s book covers.

As it turns out, rainbows aren’t for girly-girls, and they’re definitely not for sissies.

In truth, the symbolic meaning of rainbows deals with some serious ju-ju in myth and culture.

To wit, rainbows make appearances in tons of creation myths and they also stand for powerful stuff like: Creation, divinity, good luck, duality, and liminal spaces. More research into rainbow meanings made me realize there’s a lot more to them than just glittery symbols adorning juvenile tubes of strawberry-flavored lip gloss.

At its most basic reduction, the rainbow is an amalgamation of light – a perfect harmonic combination that produces a symbol of supernatural beauty, promise and enlightenment.

References to Rainbows in Cultural Symbolism

One of the most intense references to the rainbow is found in Hindu and Buddhist Tantra. Apparently, those who have surpassed their earthly ties are in a position to achieve the highest meditative state, and experience the “rainbow body”. This has also been described as a “body of light” when ultimate ascension has been reached. The rainbow body phenomenon is an ultimate oneness and typically happens at the time of death. There’s a lot more to it than this small paragraph. Ask your Yogi for more information about Dzogchen, and the ultimate realization.

Very often, I’ve encountered rainbows in times of grief. These sightings have been remarkably healing. For me, rainbows appearing in my darkest moments is symbolic of hope and promise – even in the midst of strive and struggle. Furthermore, the opportune sightings have helped me understand the symbolism of rainbows and starting over. These brilliant bows stand as a message that says, “No matter how bleak things seem, there is still hope – even if you have to begin again.”

Before I delve further into some of the sparkly potentials rainbows offer, allow me to give you a quick run-down of the symbolic highlights…

The philosophy of spiritual cohesion is a common current in the meaning of rainbows. The rainbow holds a ubiquitous meaning of unity in numerous cultures. This pervasive message of unification is specifically addressed in the union between sky and earth, with the rainbow serving as a bridge between the two.

In Chinese wisdom, the rainbow is a bridge illustrated by a double-headed dragon. This sky dragon is the mediator between heaven and earth. With two heads, the rainbow dragon is able to intercede on behalf of the people, by relaying their thoughts and prayers from the earth-bound head and sending them to the head pointed heavenwards. The rainbow is also a symbol of yin and yang in Chinese legend. In this sense, the Chinese recognize five colors in the rainbow, and harmonized, they represent perfect balance.

The symbolic meaning of rainbows as a celestial bridge is in old Norse traditions too. This bridge was referred to as the Bifrost. This “rainbow bridge” spanned into the world of the gods – it was called the “Tremulous Way” to Asgard. Here we see another connection of the mundane (earthly) element being transported by channel (the rainbow) into a realm of enlightenment (heaven, or realm of the gods).

This idea of bridges linked with the cultural meaning of rainbows employs another important symbol: That of the arch, and archways in general. Arches are symbolic of gateways, openings, and portals. When in context of the supernatural occurrence of the rainbow, it’s a reference to a portal into heavenly realms (godly, goddess elements, heightened awareness).

Whether we’re talking about bridges, arches or their symbolic representative, the rainbow…we’re also talking about choice. Why? Because in each case, there is one end, and another end. One side of the bridge, and the other side. Therefore, these symbols – including the rainbow – are iconic of crossing over, transformation and initiation.

The Native American Navajo express the idea of initiation. Their wisdom describes the rainbow as a multi-colored serpent, and when seen by a young brave, the serpent is to be ridden. That ride leads to the spirit world, in which the journeyer receives guidance. His physical path is illuminated (he is shown what to do) by traversing the non-physical path of the rainbow spirit-serpent. This is considered to be a highly important initiation. Unlike many initiations, which are designated by a tribal elder, this one is organized by the Great Spirit, and the timing is divine.

Rainbow Meanings and the Pot of Gold Legend

In Celtic wisdom, the rainbow is called kambonemos, and it means “curve of the sky”. Celtic Druids were pretty switched on about curves and arches. In their vibrant way of thinking, curves are emblems of crescent moons and the divine feminine presence. As a link to lunar/feminine energy, we’re linking up with the symbolism dealing with provision, magic, fertility, and prosperity.

Consider it: Arches, crescents, moons, rainbows… they are all reminiscent of the prominent swell in a mother’s belly, full with child. In Celtic lore, making love under a rainbow is said to insure successful pregnancy.

Ever wondered where the “pot o’ gold” at the end of the rainbow came from?

It’s a kickback from the ancient Celts. Because their meaning of rainbows is feminine -and the pot (or, back in their day, the “cauldron”) is a highly feminine symbol. Not to get too graphic, but in general…openings are feminine symbols, where as protrusions are male (you figure it out). The “gold” is symbolic of offspring. Think of it…back in their day, the primary gift, and assurance of their entire legacy is the promise of a child – the continuation of the bloodline, and ongoing of their kind. Pretty cool, eh?

Where the Celts associated the meaning of rainbows with the promise of new life provided by the divine feminine, in Christianity, the rainbow is also a symbol of promise. We see evidence of this in Genesis, 9:13 – “I have set my (rain)bow in the clouds, and it shall be a sign of the covenant between me and the earth.” Biblical scholars interpret this in various ways, but popularly, the rainbow is a symbol of God’s reconciliation with the wild and willful ways of mankind. Similarly, we see the same event in the Epic of Gilgamesh of the 7th century, BC in which a rainbow appeared as a sign of promise of the future after a great flood had devastated the earth.

“Shine your soul with the same egoless humility as the rainbow does, and no matter where you go in this world or the next, love will find you, attend you, and bless you.”

So, what’s your sign when a rainbow graces its presence upon you? What’s the deeper message and meaning of rainbows to you… on a personal level? Here are some ideas:

Potential Messages of the Rainbow

♦ Is it time to take a fresh look at the opportunities available to us?

♦ There is always another way. What other options can we see?

♦ Are you prepared to move into a new light, and see things with a new perspective?

♦ Perhaps this is a time to cross over from one phase of life to another.

♦What kinds of promises have you made in your life? How are you honoring those promises?

♦Likewise, what kinds of promises do we expect from others? Are they reasonable? Are they being upheld?

♦ What’s the condition of our connection (bridge) to our Higher Power (the deity of our understanding)?

♦ Are we ready to be initiated into a new dimension of living?

These are just a few potential messages rainbows might offer in our experience. We can expound on philosophical communications from the rainbow by pondering the symbolism of colors. Interpreting rainbow colors can give us a vibrant journey into deeper understanding of serious rainbow power.

I’ve tossed out a lot of info about the symbolic meaning of rainbows here. In the end, the simplest interpretation is this: The best message and meaning of rainbows is assurance and appreciation. Beholding a rainbow is a gift, and when we encounter its beauty, it is the perfect time to be grateful for all the gifts in our lives.

I hope you have enjoyed these thoughts about the symbolic meaning of rainbows, and this article has given you some colorful ideas about the potential this natural phenomenon can pose in your life. If you liked this page, you might want to check out other related topics at the end of this page. Thanks for reading, and may all your rainbows lead you to your own personal gold.

Take Away Tips About Symbolic Meaning of Rainbows

An ending is just the beginning.
In many cultural myths, like some Native American legends, the rainbow is a symbol of initiation. The rainbow was a sign that it was time for one of the tribe members to undergo a new path in life – perhaps a spiritual leap, or perhaps a rite of passage from child to adult.

Promise.
Sighting a rainbow has long been believed to be a promise of good things to come. This commonly stems from God’s promise in the Bible (Genesis 9:13).  But there are other beliefs about rainbows being a symbol of hope and promise.

Pot o’ Gold.
As with many myths, they get shifty over time as they are told over the ages. The pot of gold at the end of the rainbow didn’t start as a literal kettle of coin. It was actually the gold of new life. In ancient Celtic myth, the rainbow is a sign of fertility, and the promise of a newborn on the way.

As a symbol, rainbow meanings are vast, profound and even revolutionary for the soul. Get more about magical meaning of rainbows in various cultures here.

As with anything, color adds an extra layer of depth, quality, and meaning to the overall view. The symbolism of color enriches our perception in big ways. Get a list of symbolic color meanings here. 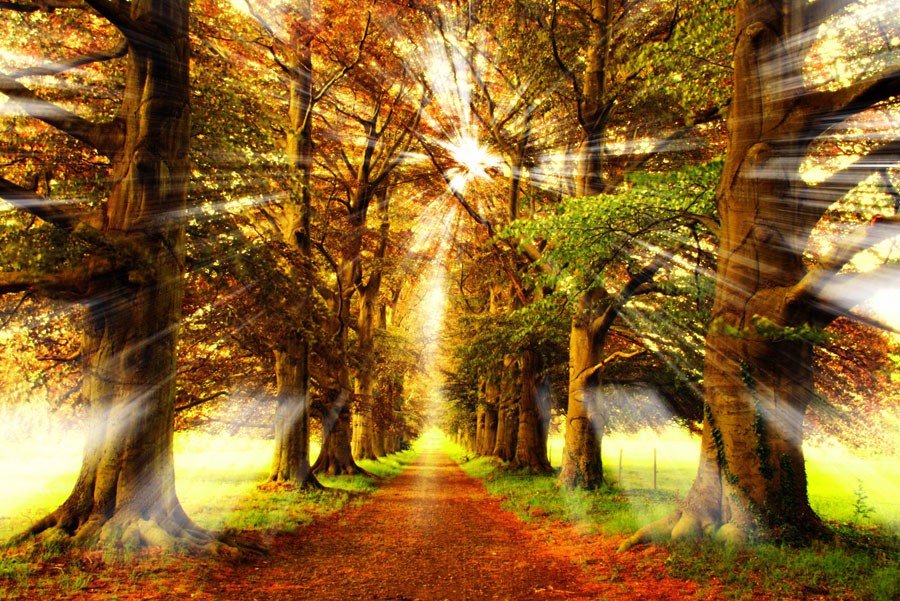 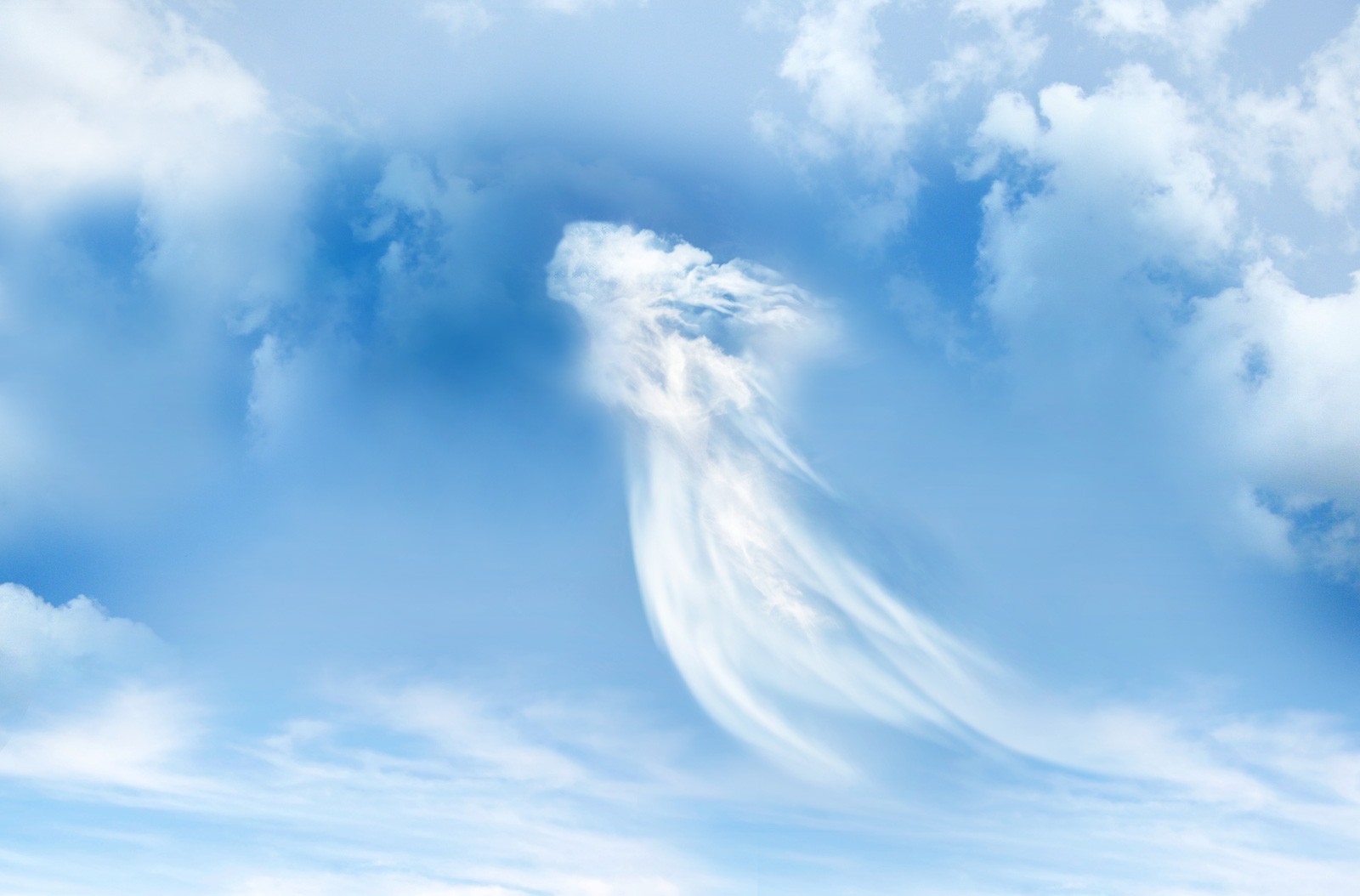 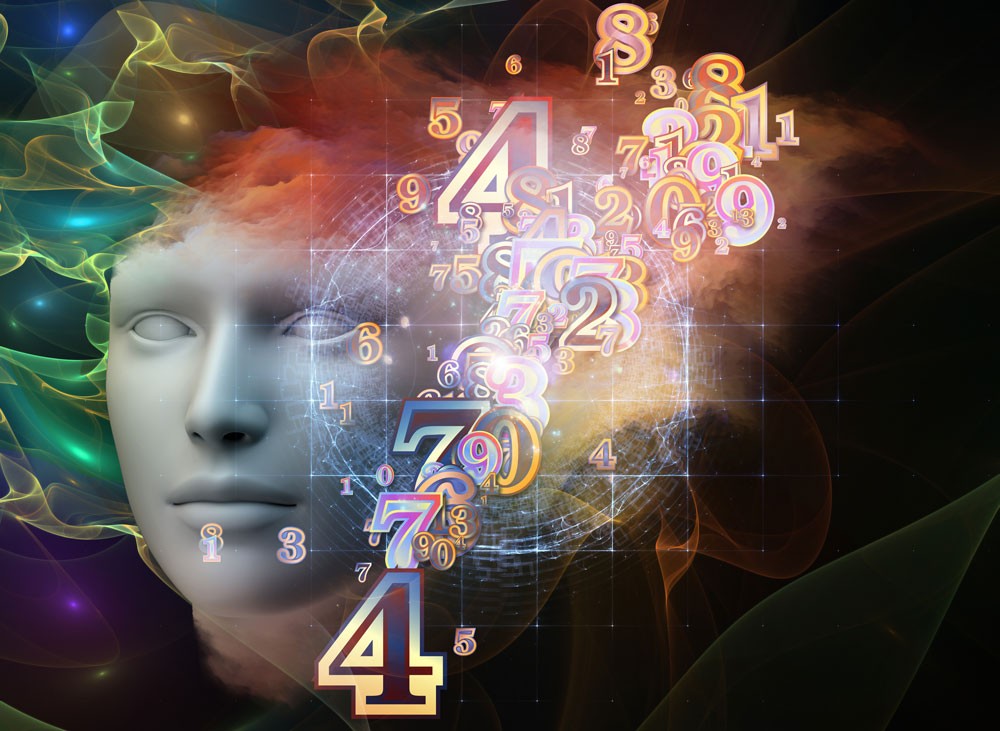 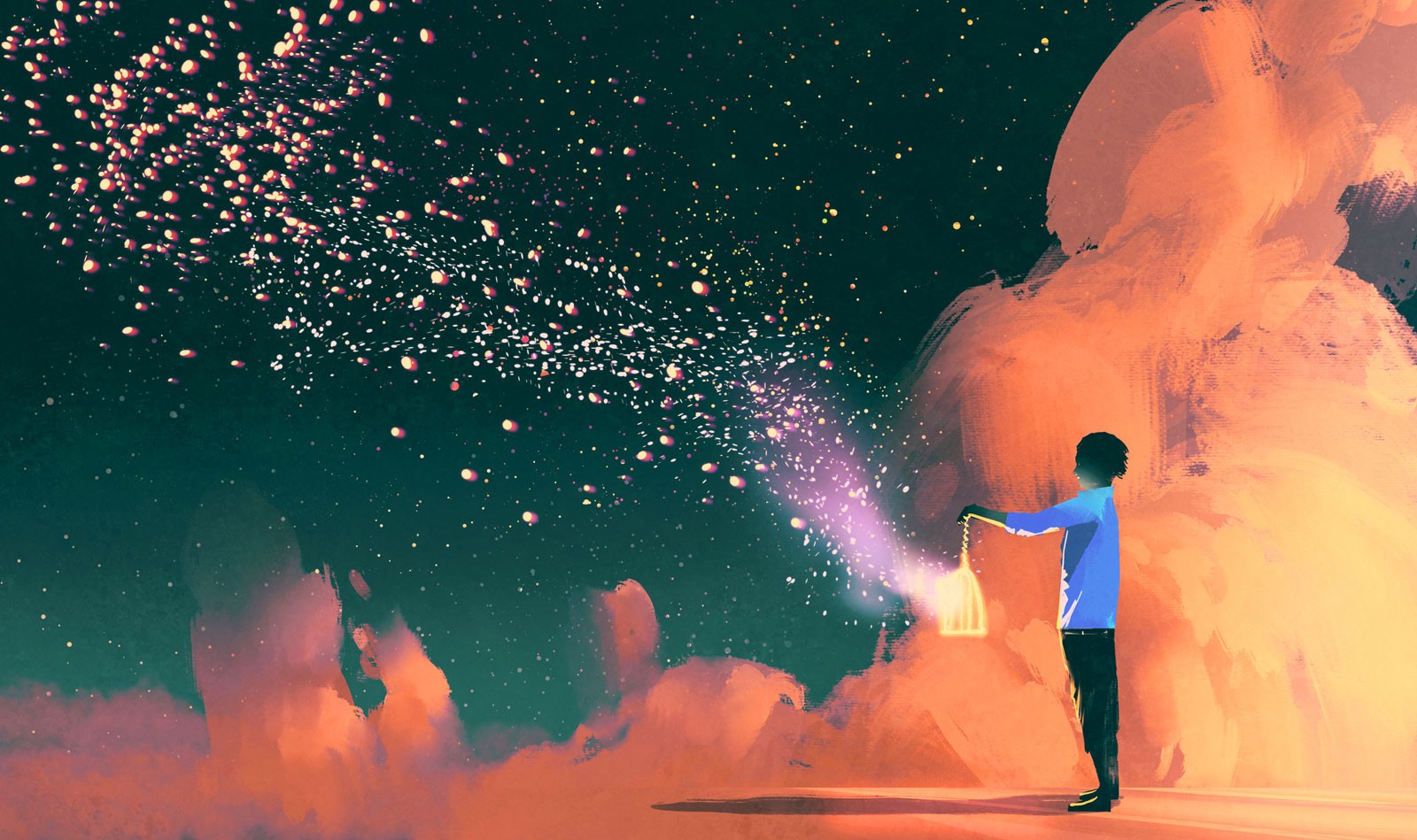 Symbolic Meaning of the Firefly 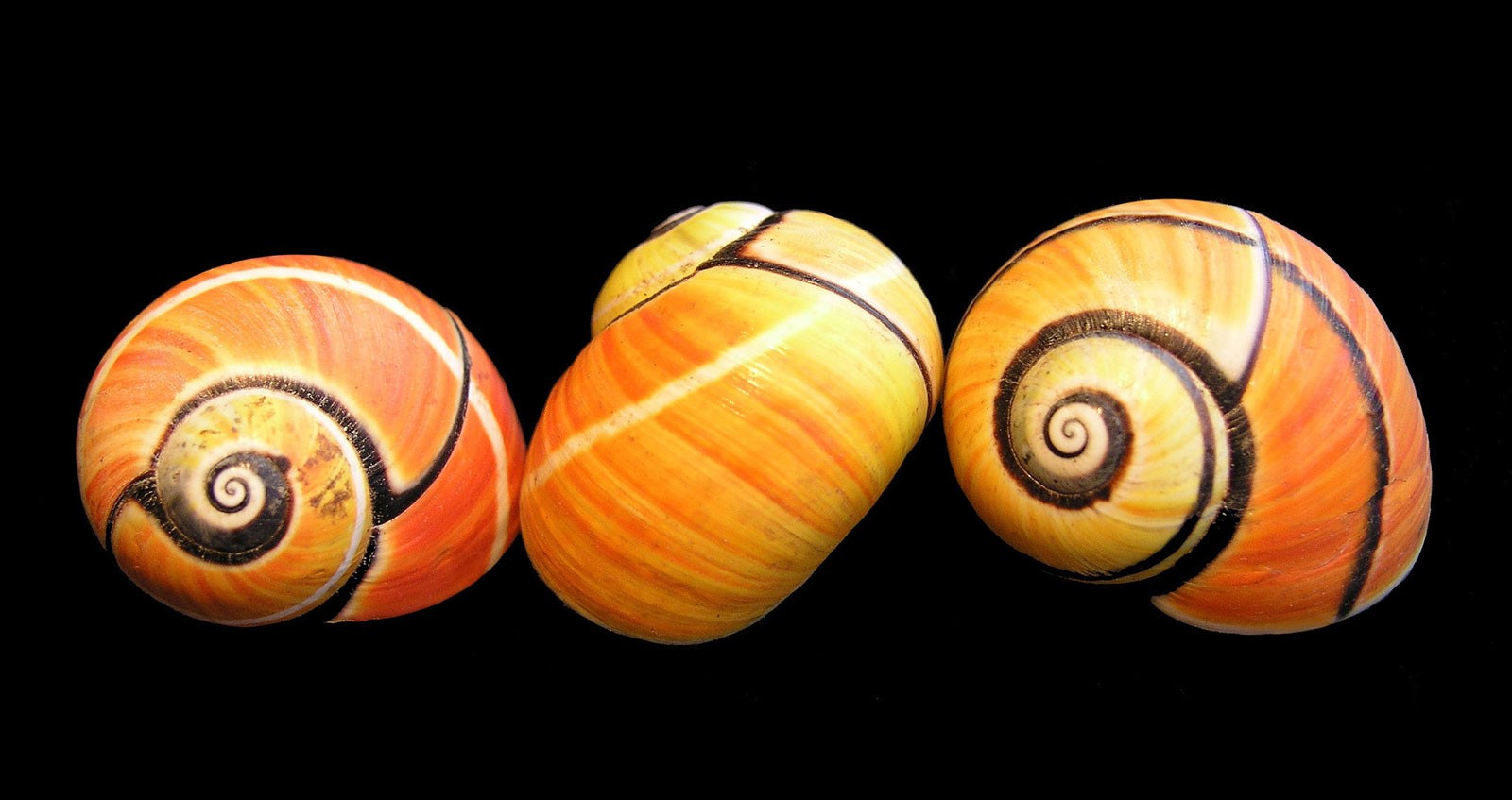 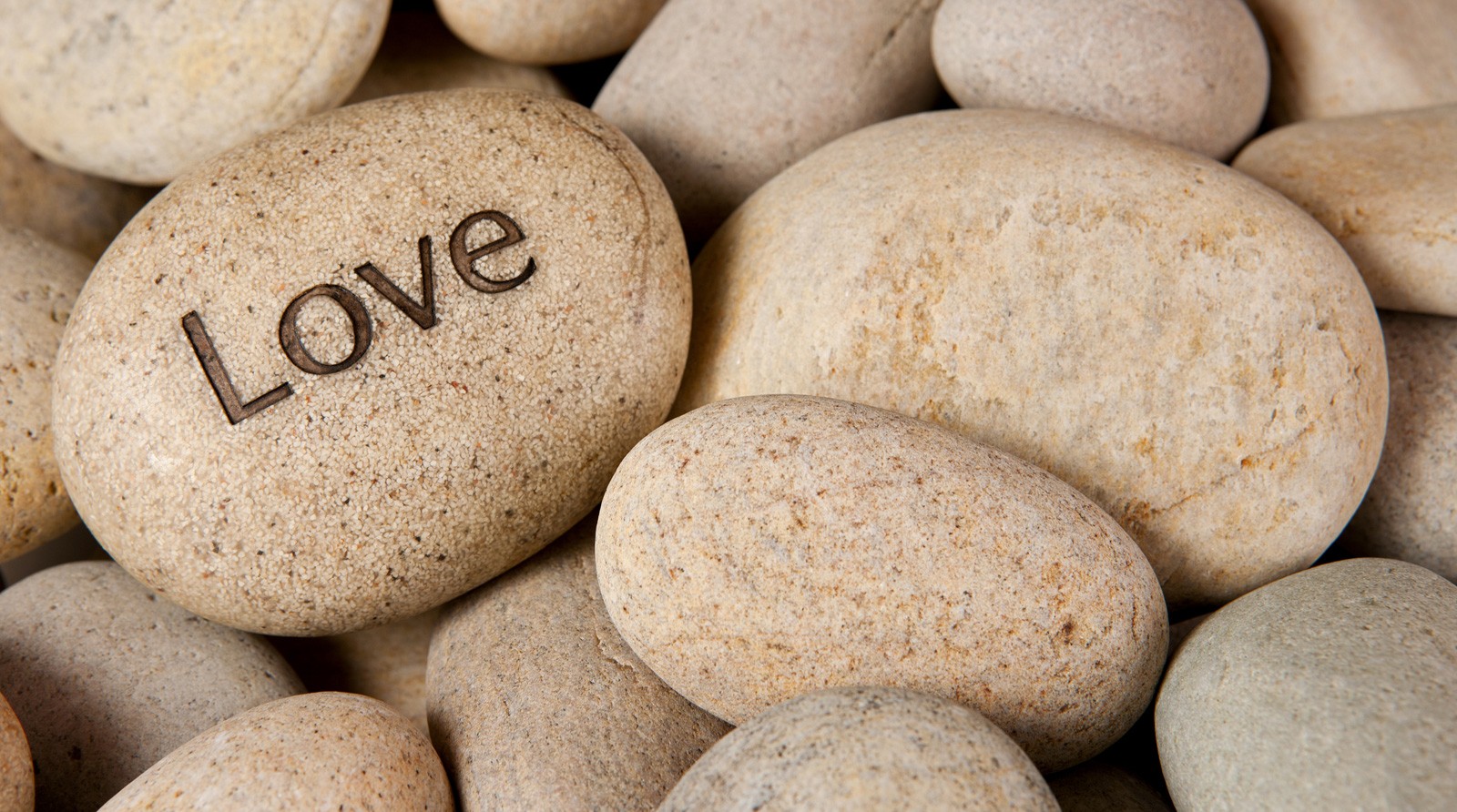 March 21, 2018October 28, 2021
Whats-Your-Sign.com (WYS) is a trusted Etsy affiliate & Amazon Associate. We also promote certain products we've tested and approved. As such, the website features sponsored products for Amazon or Etsy or other afiliates. Should you make a purchase from a link on this website, WYS may receive a small commission. This website also hosts advertisements. Please see our policy page for further information. Thank you for your purchases, as it contributes to keeping this website online and running.