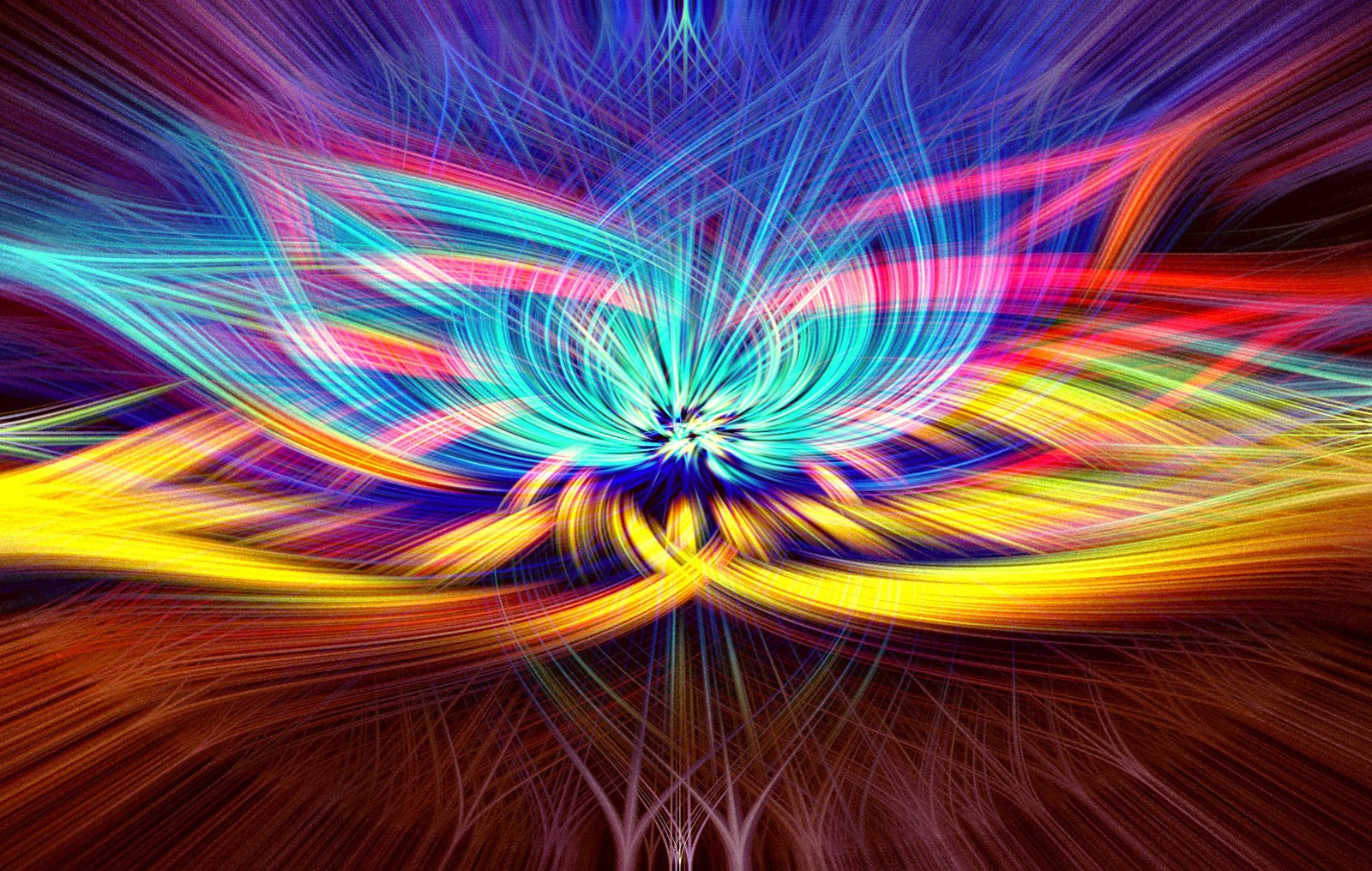 What You Should Know About Chakra Color Meanings

It’s a perfect time to talk about chakra color meanings because at the time of this writing, springtime is eminent, and the seasonal theme is all about blossoming, awakening, colorful perception and transition.

Our earth is a great laboratory for symbolism because she is a constant reminder of abiding connectivity. Furthermore, our physical bodies are laboratories too.

They contain every element found in the universe. They are also a unique mixture of energy (spirit) and physical (body). These two essences – body and spirit – are married together.

They are inseparable. As such, we can utilize this connection to be more dynamic. By consciously working with the inherent connections between mind, body spirit we can be our whole selves. By being whole, we become vibrant and everything around us is astonished by the ebullient radiance that emanates from us.

“The soul is tinged with the color of its thoughts.” 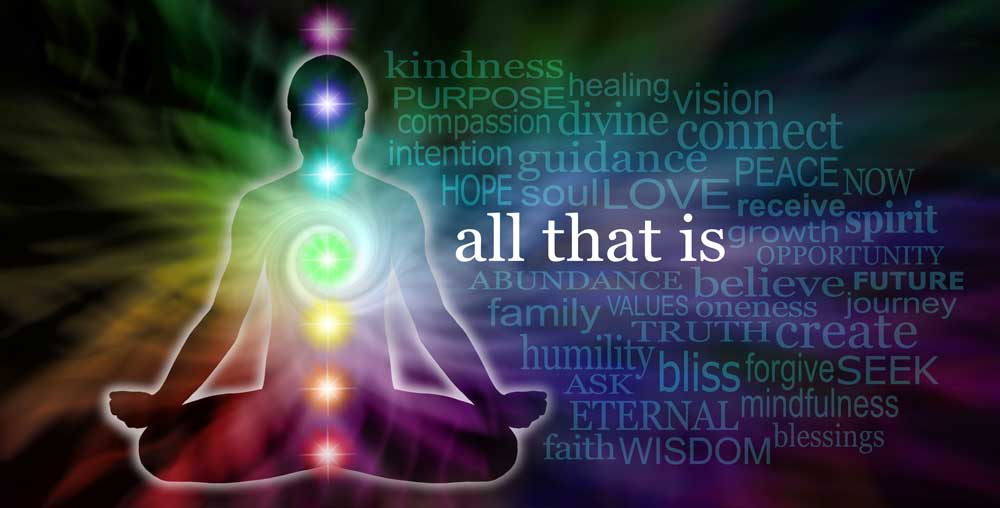 To illustrate the interconnective nature of the chakras, consider this:

The first three chakras are like the center of the Mother (Earth). In her belly broods a broiling hot core at 11000 degrees Fahrenheit, just as hot as the sun‘s surface. That earth-core is indicative of the first chakra: Rooty red, roiling and primed.

Moving out from her center core, the earth-layers subdue just a bit and co-mingle. Moving out into subjectivity, we see a lightening of colors in second (orange) and third (yellow) chakra. Here, a distancing from the creative fire and passion, a cooling off, and a time of exploration of the molten matter from which we were born.

Surfacing out from the core and into the visible vibrant layers, we see budding greens (the heart chakra) in trees, grasses, flowers, and all manner of magical green-gemmy goodness.

The heart is the mixer. The equalizer. The channel through which the material and immaterial must move in order to create…well, create anything and everything. Nothing of substance or natural order comes into being without first passing through the gateway of the heart.

Moving through the heart chakra we reach the ethereal…those communicative aspects of being (blue throat chakra) that are measurable, but not concrete. We slip off some of the weighty mass found in the lower chakras, and ascend to inner awareness (indigo third eye chakra).

Ultimately we find ourselves in a place of heightened expanse (the crowning violet chakra) where awakening finds us in the blissed-out position of amused observer. Here we conceive more clearly the miraculous concept of simplified being and the inseparable relationships of everything.

Consider this illustration as you explore the chakra color meanings provided below. As you do, imagine the root chakra as the first step in a operatic event with each subsequent chakra a scene equally important, and adding value to the entire opera. Just as operas tell a story, each chakra sings about a phase of learning in our life story.

Here are a few chakra color meanings I’m offering as lyrical suggestions to your own personal opera. 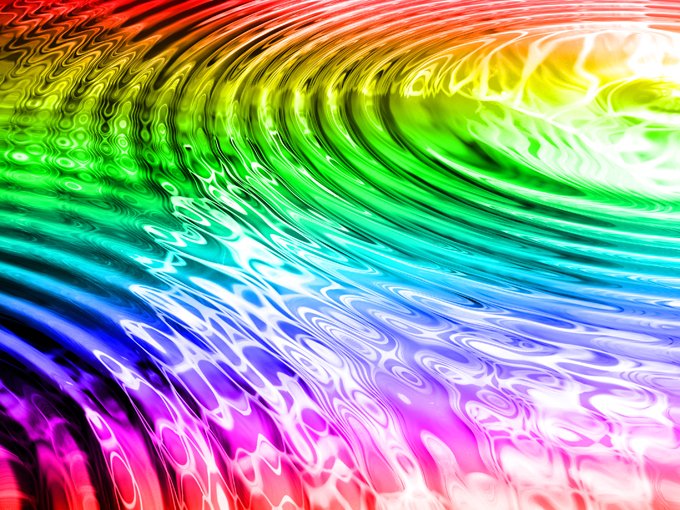 we can flavor our lives with deeper, richer wisdom.

For basic understanding on color symbolism, check out my article on 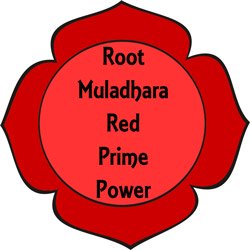 Red chakra color meanings:
The first, the root and base chakra. Just like the core of Mother Earth, it pulses and swells with bright crimson radiant heat. That red is a clear sign of visceral, primitive power. It’s the sparking place for big blasts of raw creation. When you see red, consider a sonic boom of powerful action propelling you forward. Consider this the spark of action. Make this red heat the seat of your physical/spiritual birth. This is the hot coal of your perception, and it’s a great fuel-maker for whatever you want to start cooking.

Orange chakra color meanings:
The second, sacral chakra. We’ve got a nice glow on here. From the “pow!” of our red roots we move into a more sophisticated stage of creativity. This is our moment to sculpt our rawness, and refine ourselves into illumed orbs of creative beauties. In silky waves of orange we become aware of our physical-ness and begin to make prime connections about the magnificence of our bodies. Orange speaks to us about exploration – new additives are mixed with raw matter, and this is where we conjugate. Here we embrace polarities, consume them, and learn the dance of unity. 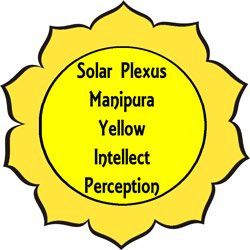 Yellow chakra color meanings:
The third, solar plexus chakra. Moving out of the prime center of raw matter, having joined with polarity we now come into a seat of personal power and awareness. Yellow is the dawning of a new perception. As the sun is the center of our galaxy, the third chakra is a golden energetic orb of centralized force. It can feed us, sustain us, teach us, and magnify our (already magnificently intense) ancillary energies. Yellow is the beacon held under a magnifying glass. What we submit for contemplation is amplified by the solar plexus chakra. This is because we have entered the dawn of specialized perception. When yellow gently strokes its fingertips across your awareness, it’s prompting focus. Focus into the core of inner being, inner intelligence. This yellowy core asks us to honor the fullness of who we are. 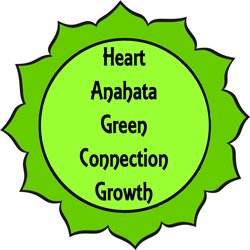 Green chakra color meanings:
The fourth, center, heart chakra. The chakra color meanings of the heart speak to us about fresh new growth, the promise new hope brings, the eternal nature of love and the ability to share that love for the common good. As mentioned earlier, the viridian heart chakra is the fulcrum. Base matter filters through it, as does gossamer intangibles. The heart is the dispatcher of information – all kinds of information. From physical, emotional, and intellectual the heart serves as the hub – and interconnects the matrix of existence. When green glows in your thoughts, it’s a cue to get back in step with the beating rhythm of the pulse of all life. Place your awareness upon your neurological, and vascular networks – then translate these networks into externals like internet pathways, road grids, and relationships. No difference, really. The heart asks us to take pulmonary awareness to broader, accepting, loving levels. 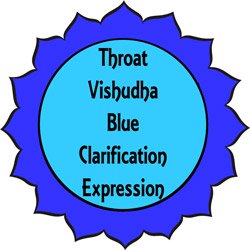 Blue chakra color meanings:
The fifth, throat chakra. Continuing the epic adventure through the chakras, we’ve moved through the filtering train station of the heart and now we’re asked to take what we learned on a pulmonary level and express it into our surroundings. We’ve dreamed the dream of creation, now we are on the path to expressing that dream outwardly. Swimming in these beautiful blue seas we find new connections, and discover true joy is in sharing and communicating our discoveries. When blue hues fill our visions it indicates our willingness to see solutions in everything. Our resources are made known, our expression are clarified like crystals, and we convey ourselves with a mix of playfulness and natural authority. 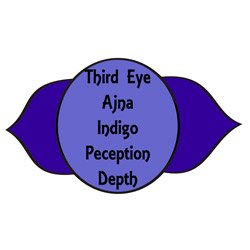 Indigo chakra color meanings:
The sixth, third eye chakra. We know more fully all the depth of chakra connectivity. In indigo pools of depth and contemplation we see more clearly how energy runs together. Indigo is an oceanic orifice – always present – just waiting for us to dive in to discover the behavior and rhythms of energy itself. When we swim round its ripples, we see all energy is interrelated, each nuance a partner, each ringlet interlinking depth and texture to the story of our existence. When we see with indigo vision we don our x-ray glasses to peer past the veil of illusion. All is revealed. Awareness is found in the deep purple folds of our innermost selves. It’s like we’ve returned to our red chakra roots, come up through ourselves by way of the chakra spine only to meet ourselves again with new understanding. 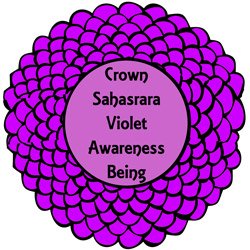 Violet chakra color meanings:
The seventh, crown chakra. Like the first violet crocus opening up to the light of a new spring, our awareness pulls itself up out from the strata of matter, layers of time, and levels of perception. No experience can compare or relate to this one. We recognize, with surreal objectivity, that our outward spanning and unfolding petals of consciousness is not an achievement. Rather, the unfolding has been happening all along. It’s as if a grand, orchestrated momentum of expanding energy has been surging in our conscious background all the time. It is only when we hopped over a few fences of reality that we see we had access to this surging growth all the time. Violet is the culmination of our time, place and being. In this luscious lotus of life, we realize our progress is not hammered, merely channeled. Indeed, violet asks us to simply be, because we have always been, and our expansion is inevitable. 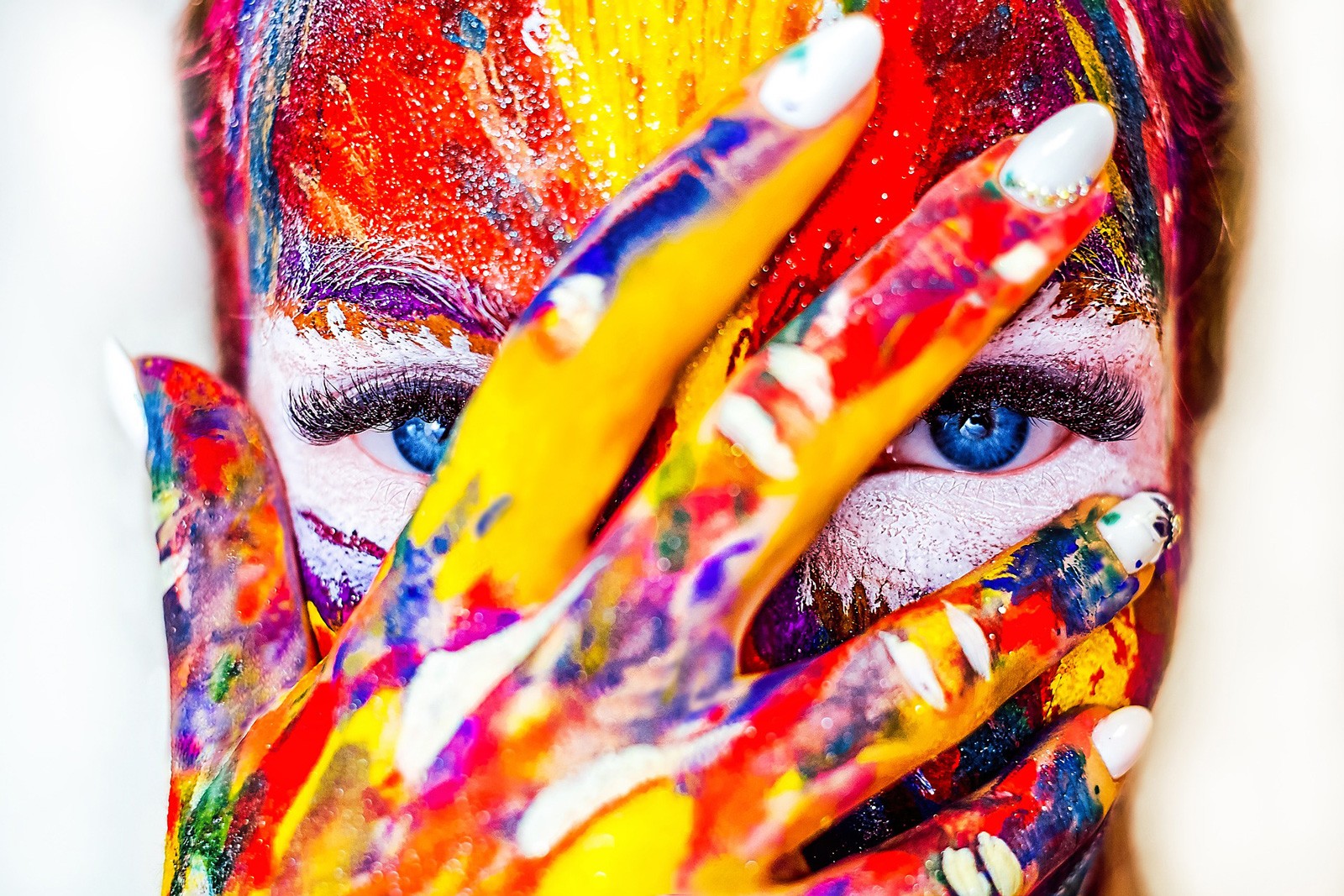 As you continue to philosophically paint with these chakra colors, I invite you to look around your environment and begin to associate the colors you see with chakra color meanings.

This kind of peak attention given to chakra colors in relation to your environment will help with the following:

I hope you have enjoyed these thoughts on chakra color meanings.

My greatest desire is that this an other articles on this website offer you insight and new perspective. As always, thank you for reading. 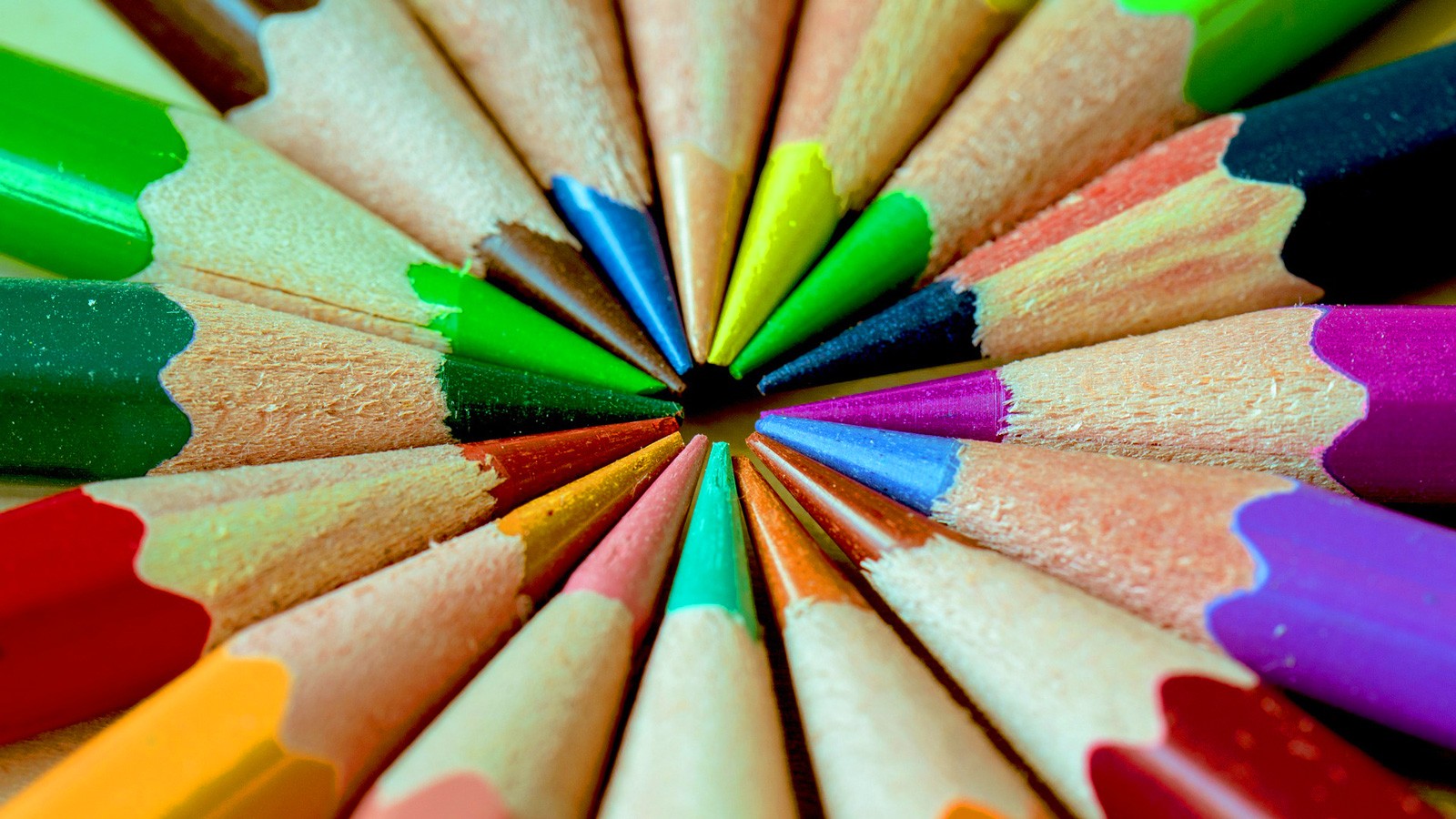 Here are a few observations I use when interpreting color meaning. Along with a brief description of each color’s symbolism I’m including planetary, zodiac, numeric correspondences. I also thought it would be fun to include healing properties, as many health practitioners work with color for healing purposes. Learn more about color meanings here. 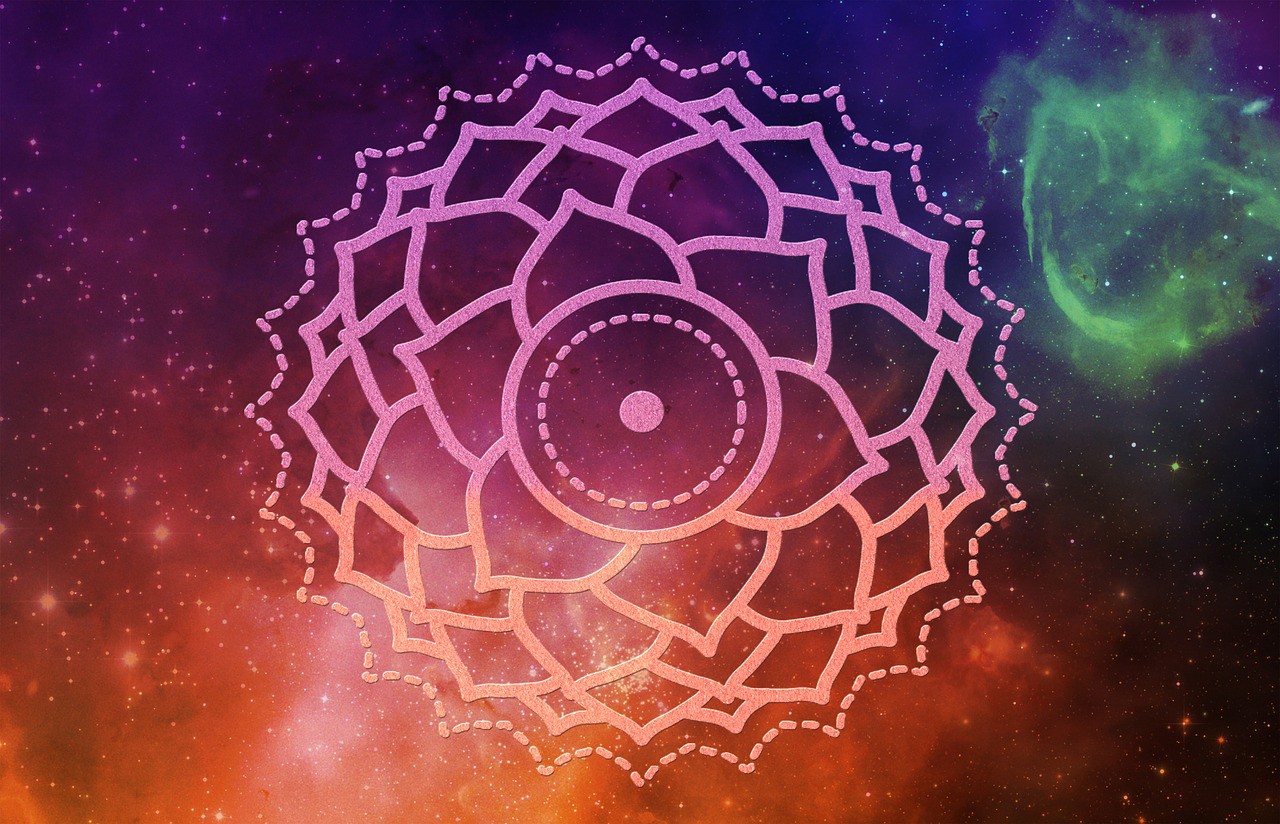 Chakra symbol meaning is like a deep opening into a well of ancient knowledge. The chakra itself is merely a circle. It is the esoteric symbolismattributed to the chakra symbol that offers a wealth of meaning. What’s more, we can apply this perennial meaning to all aspects of our lives. Learn more about the powerful symbolism of chakra meanings here.