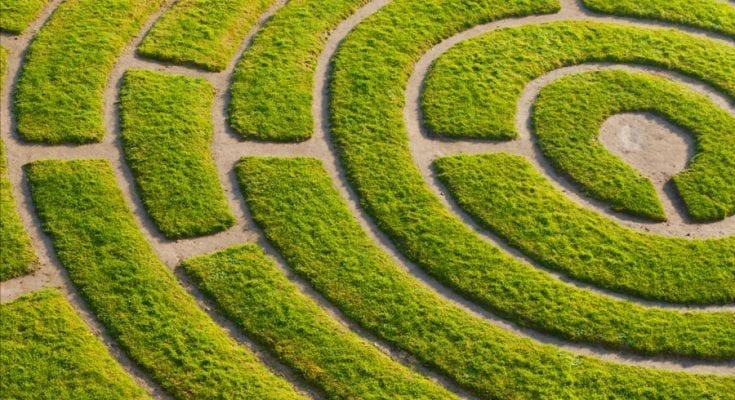 Labyrinth Meaning as a Symbol of Life

At first glance, your reaction might be: “What? It’s just a maze! Big deal!”  True, the labyrinth symbol is a maze, but its history and symbolic implications are far reaching and quite profound.

I find it interesting that some of the most simple and seemingly benign symbols often pack the most powerful punches. By appearances, the labyrinth doesn’t seem like a big whoop, but do a little research and we find it is actually a symbol that can be a catalyst for extraordinary growth and personal change.

What I find very keen about the labyrinth is it is a symbol that reflects both physical and spiritual aspects of life.  This is a symbol that tells the tale of physical and spiritual evolution.  All of us have experienced loopy points in our lives. The labyrinth is an example of these strange loopholes or u-turns our lives can take (spiritually and physically) in our time here on earth.

In many Native American cultures, the labyrinth was used as a rite of passage.  Boys turning into men would walk a labyrinth crafted by stone laid in a spiraling pattern on the ground. They did so often after a smoke ceremony. The smoke would have a loosening effect on the senses which provided an altered state. While in this altered state, the young brave walked the labyrinth. The purpose was to navigate without showing fear of being lost. Another goal was to demonstrate the twists and turns of life, changes of the heart, transitions of emotions. It was a safe way to teach a boy to become a man that all things change…and our response to that change is crucial.

Similar labyrinth ceremonies were held for women in some Native American cultures.  These female-based labyrinth walks were often the mark of transition from girl to woman.  When a female of the tribe came upon her ‘moon cycle’ (menstruation), she was encouraged to walk the labyrinth.  In this case, the labyrinth represents the walk of a woman as a mother. This particular labyrinth walk signified a girl coming into her womanhood.

The Hopi have a brilliant example of the labyrinth as a symbol of motherhood. Their version of is called a ‘Tapuat’ and it represents the journey from being born from the mother and journeying through life until we return back to the Mother. The center of the Tapuat is symbolic of the womb, and the pathways surrounding the center represent the varying spirals we all experience in life…as a mother and as a human..as a child to an adult.

What’s even more intriguing about the labyrinth as a symbol of life is that it is found all over the place in nature.  Mother nature is always spinning out intricate spirals, mazes and labyrinths.  Much of this has to do with the proximity of seeds to promote life. It makes sense.

Many plants develop and bloom in a circular pattern. As leaves and petals are splayed out in that labyrinthine pattern, pollen and seeds rub against each other, making them more easily airborne.  I mean, we don’t see rose blossoms unfurl in the shape of squares, do we?  That’s because that isn’t the best delivery for the good bits in the middle of the blossom that insure future pollination.

As always, thanks so much for reading, and I hope this article was illuminating.

May all your labyrinth-walks be enlightening.

The Hopi symbol Tapuat is an icon for the mother and her child. The lines represent stages of life, umbilical cord, and the path of moving – always within the surrounding watchfulness of the Mother. Get more information on the Hopi Tapuat Labyrinth Meaning as a Symbol of Life here.

We can use the lemniscate (known as the infinity symbol) as a tool for self-development, growth and meditation. Get the full article on infinity symbol meanings here.