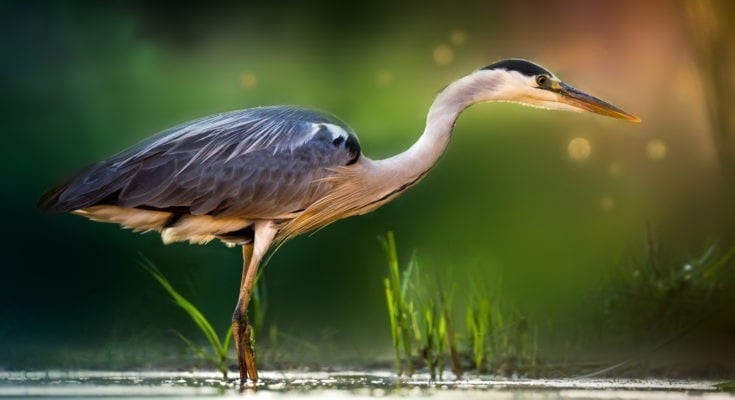 Symbolic Meaning of the Heron

Insights about Totem Meaning of the Heron

My friends Ted and Dana have magnificently manicured landscaping around their home in the woods. It’s quite impressive to see their perfectly tailored yard butted against an untamed wilderness.

You could call my friends nature-lovers, but they had a bone to pick with the heron.To explain, every day at dusk the same heron faithfully came to visit Ted and Dana’s beautifully kept lawn.

At first, my friends were enchanted by the heron’s house call. That is, until they discovered the heron was dining on the koi fish from their Zen-style water gardens. When they figured out their koi fish (at $300 a pop) was a heron-buffet, they lost their Zen attitude, and began employing dissuasion tactics to keep the hungry heron out of their ponds.

I tried to tell them their efforts would be fruitless. The heron is shrewd, intelligent, resourceful and also very determined. Whatever heron wants, heron gets (oh, that’s Lola – but you know what I mean).

The most outstanding feature about the heron, to me, is its environmental presence. The heron is at home in three elements: Water, Earth and Air. This speaks to me of diversity. Those with the heron as a guide or totem can relate to this. These people are either very skilled in a myriad of different elements, or they are branching out in various skills, and the heron is offering confidence in the process.

Here are a few keywords relating to the heron…

Symbolic Meaning of the Heron – Keywords

I look at that symbolic list of heron meanings and go “whoa!” – what an admirable set of qualities. In truth, the heron is an admirable bird, and those who have an affinity to the heron as a guide or totem are equally admired. Keep reading to identify how the heron earned these qualities, and how the heron freely gives them for our own use in daily life.

Even before diving into culture and myth for the symbolic meaning of the heron, it’s a good practice to take a look at its physical traits, its environment and behaviors to mete out a deeper understanding of this bird.

The meaning of the heron deals with being comfortable in spaces that are neither here, nor there. It prefers hunting at twilight, which is a symbolic and magical time of ‘in-between’. The heron will have one foot on land, and one foot in the water – this action has been recognized by ancient cultures as a sign of liminality – of crossing into the a space that is neither here, nor there.

All this talk about being in the space ‘in-between’ illustrates a remarkable lesson. We are not our environment. We are not even our bodies. And the ‘in-between’ represents a space suspended – without time or place. It’s what Eckhart Tolle might refer to as the “NOW” in his book The Power of Now: A Guide to Spiritual Enlightenment. Heron’s are in the Now. They can help us be in the Now too, which is a vital practice in maintaining stability, calm and fluidity in living life.

It’s not just the liminality that establishes the heron as a present-moment icon. It’s the heron’s way of hunting that also illustrates how graceful the heron exists in the Now.

-Ever observed a heron for any length of time – especially at twilight? I have…at Ted and Dana’s, in fact. I watched a heron for close to an hour as it stood still as a sentinel over my friends’ perfect Zen pond. Suddenly, and without so much as a twitch to forewarn its strike, the heron pierced the surface of the still pond with its beak and pulled out Ted’s $300 koi fish. Just as quick, the heron flew off with its golden-scaled treasure tightly pierced in its beak.

There’s big juju there. How many of us can stand stock-still for more than three minutes, much less an hour? How many of us can exert the kind of patience the heron does in waiting, watching, being ready for our reward? How many of us are prepared to take immediate action and strike in the instant our opportunity swims by? I don’t know how many of us can do these things (I sure struggle in these areas), but I do know the heron can help us achieve this kind of intense tranquility.

How? Simple focus on the heron will initiate contact with the Zen-zone. Whether you are physically in Nature, or in your mind’s eye during meditation, contemplate no-action through the heron. Consider the heron immersed in highly focused stillness – reflected by the very water into which it’s gazing. Let the stoic presence of the heron imbue with a quality of stillness that is both fluid and steely.

In my opinion, I could end this article about the symbolic meaning of the heron right here, because I being present in the moment is the whole kettle of fish in the marsh of lessons the heron offers us (pardon the pun, lol).

But the heron would tell us there’s more symbolic marshes to wade through and more expensive fish to be plucked from the ponds of life.

To wit, the heron is almost exclusively a solitary creature. It prefers to seclusion, privacy, and even favors hunting alone rather than with a group or mate. The only time the heron breaks its vow of being sequestered is during mating season. If the heron is your totem or guide, you can completely relate to this. Heron people prefer complete isolation…but are equally at ease in a crowd of peers.

As a guide, meaning of the heron reminds us that solitude can be a healthy practice. It’s okay to be alone. Conversely, the heron encourages us to recognize the times in our lives when it is imperative to be among other people – particularly people who love and support us. The heron carries a message that says we cannot always do everything by ourselves. There are times in everybody’s life in which, to quote the Beetles, we gotta “get by with a little help from our friends.”Speaking of social behavior, the heron is a teacher in the area of domesticity too. It’s all in the nesting. Even though it’s fiercely independent, the heron makes concessions when it comes to making way for its offspring. Building a home is a matter of teamwork for herons. Both the male and the female are equally engaged in making the nest, and preparing for their progeny. There’s a lesson there. The most capable and staunchly independent among us must occasionally concede – some areas of life require a partnership. Further, when that partnership is formed, it’s a good idea to take equal share of the responsibilities. Most importantly, the heron illustrates that a partnership can flourish with both parties make an equal investment in their futures.

Who knew the meaning of the heron could be so forthcoming with life-lessons? To be sure, it’s a regal bird with limitless capacity for extolling profound wisdom to those of us who are inclined to receive it.

Maybe…in time, my pals will acquiesce to the inevitability of the herons’ determination and rightful place in Nature’s theatre. With that surrender, perhaps Ted and Dana will settle into the front-row seat they have outdoors, and savor the timeless classic played out in Nature, with the heron as the main character in the show.

The heron offers lots of life lessons, if only we are prepared and open to pay attention.

Symbolic Meaning of the Stork

A close cousin of the heron, the stork has a special set of symbolic meanings. This article explores why it’s thought to deliver babies, why it is a good luck symbol in ancient Rome, and more. Learn all about symbolic stork meaning here.