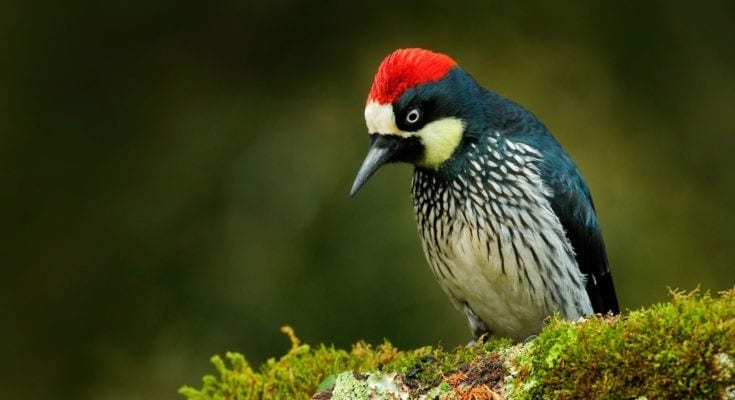 Tapping Into the Symbolic Meaning of the Woodpecker

The meaning of woodpecker is strongly rooted in communication and opportunity. When the woodpecker shows up in our lives, it’s a good time to get clever about how we communicate our needs to reach our best advantage. Woodpecker meaning is also about determination and being resourceful. Get woodpecker totem info here.

To be sure, the woodpecker is an attention-grabber, and those who claim this amazing bird as their totem will attest to its ability to shake up awareness.

Nothing breaks the silence of a hiking in the woods like the urgent, rapid-fire percussion of a woodpecker’s rapping against a tree.

When I hear the woodpecker knocking, I think of opportunity. You know the old saying “when opportunity knocks, answer the door.” That’s precisely what I’m driving at here.

Woodpeckers are extremely opportunistic themselves. Each tree is a door, revealing tender morsels of food (grubs and ants are their favorites). Other trees will yield against their beak-hammering to provide great mansions for their young.

A Quick-List of woodpecker symbolic meaning include themes such as….

Symbolic Meanings of the Woodpecker

When the woodpecker comes tapping into our awareness, it’s also a signal to use our heads. Just as the woodpecker uses its head (beak) to hammer out solutions (food, shelter), we too can use our intellect in finding solutions to our own barriers. 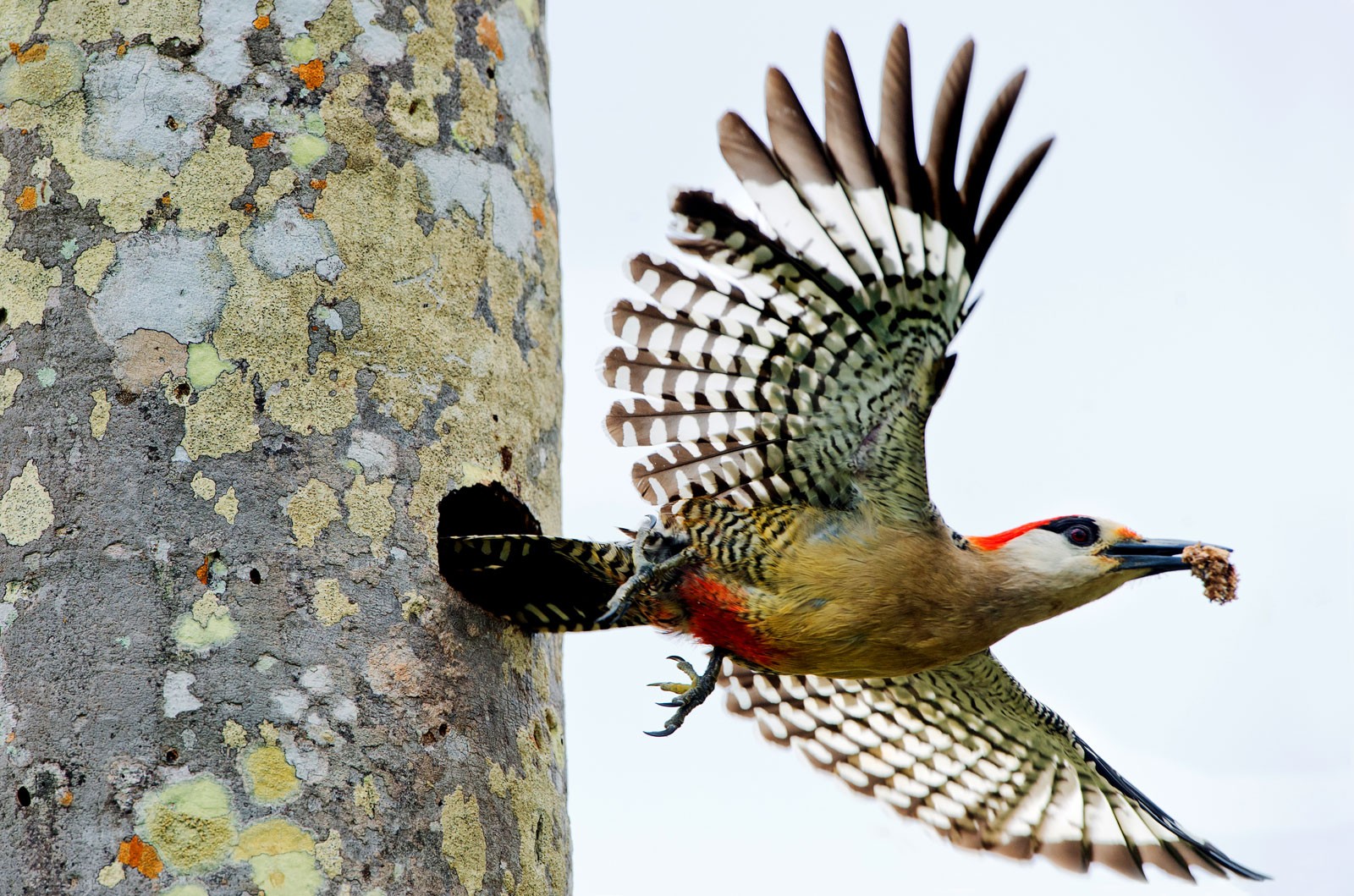 “Think of all obstacles as stepping stones

to build the life you want.”

The symbolic meaning of woodpeckers also point to a need for creative vision. Being opportunistic, woodpeckers can see value everywhere, even in dead trees. Have you ditched an idea or given up on a project? The woodpecker may be trying to tell you to breathe new life into your project, just as they build new homes into dead trees.

Further, the symbolic meaning of woodpecker indicates a return to our roots, or having trust in our basic (gut) feelings. Dr. Carl Jung observed the woodpecker as a symbol of a return to the womb of creativity. In this observation the tree is symbolic of a womb; earthy, grounded, sturdy and secure. The woodpecker’s home within the tree is analogous of a fierce determination to return and protect that which is sacred to us.

When this bird comes pecking, it is a call for us to return to our roots, back to the womb of our ideas and use our intellect and discernment to follow through with our plans.

This analogy is doubly profound in the case of red-headed woodpeckers as the color red is associated with the root chakra. Prime, protective energy. Another clear sign for being aware of our core impulses, and our basic beliefs.

Native North American wisdom recognized the protective home-based themes of the woodpecker too. Prairie tribes had a myth that the title of protector of humankind was once vied for by the turkeyand the woodpecker. The woodpecker won the title because of her ability to make such marvelous nests wherein the spiritual seed of humankind would always be sheltered from predatory threat. 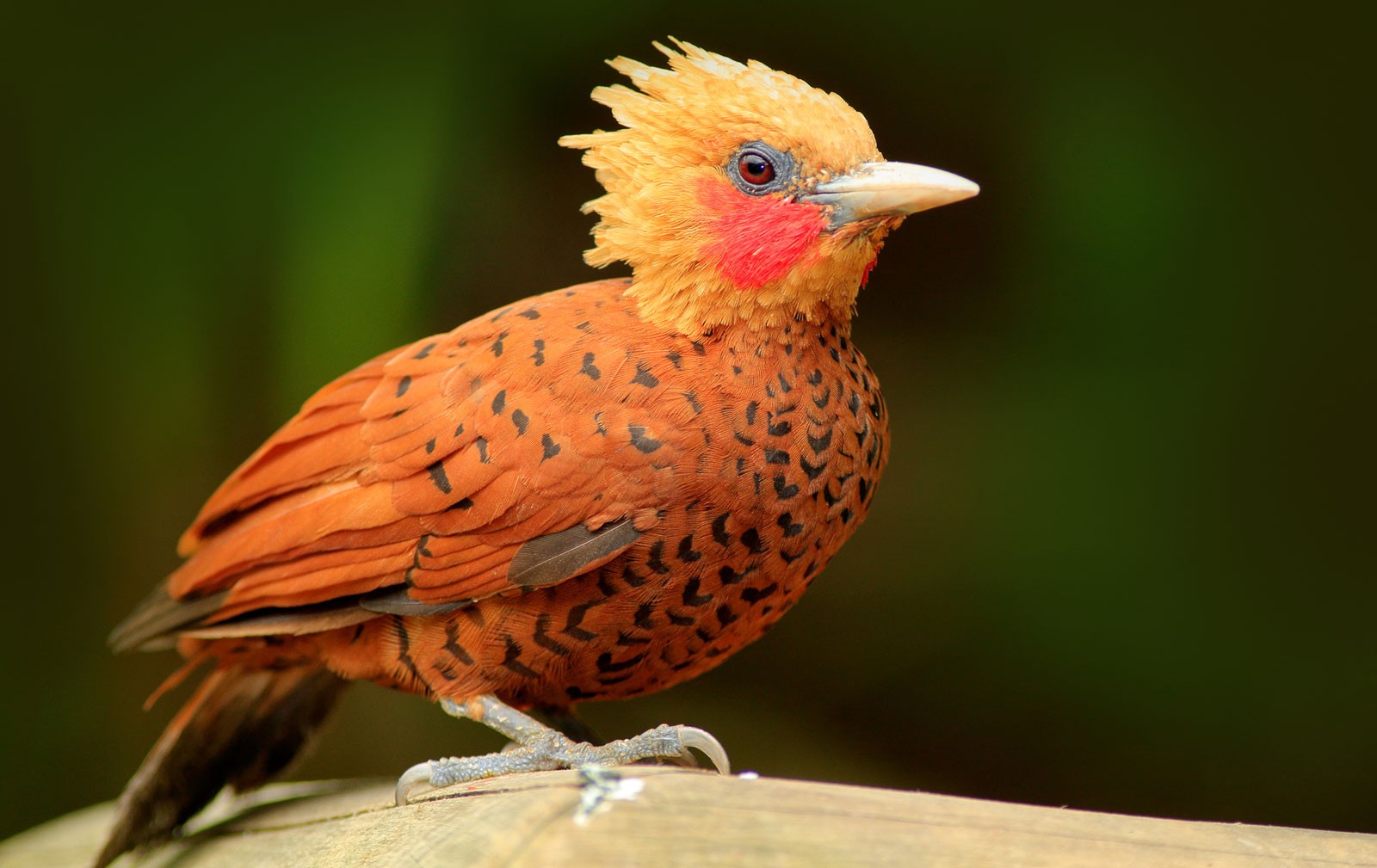 “It is the surpreme art of the teacher

to awaken joy in creative expression

The woodpecker may also remind us to be mindful of our words. It has a narrow tongue, extremely effective for picking up food in narrow places. This is symbolic for using a narrow route to get the most profound effect. The woodpecker asks us to use fewer words to make a stronger impact in our statement.

As we continue to explore the symbolic meaning of woodpecker, we see communication is a strong theme. In fact, when I hear the woodpecker, I think of Morse code, and I try to figure out what kind of rhythmical message the woodpecker is sending me.

It wasn’t until years later I did some research on the bird that I discovered, indeed, the woodpecker actually does peck out signals to their kin as communication!

Drumming has historically marked the beginning of events such as processions, honorable ceremonies, even war. Perhaps this is why the woodpecker (and its beak-drumming ways) was often associated with Roman battle, war and victory.

Native North American wisdom also prescribes drumming as a means to journeying (transcendentalism), and so many tribes considered the woodpecker as an other-worldly messenger, and a prophet.

In Roman mythology, the woodpecker is associated with Mars, which is a planet of energy, and initiative. The zodiac sign of Ariesmight be drawn to the woodpecker as a totem animal because of its association with Mars too (Mars is the ruling planet for Aries).

These two (woodpecker and the Ram which is the zodiac animal for Aries) have the propensity of initiation (trail blazers, starting new projects) in common. The woodpecker is the first to initiate communication. Consider the silence of a winter day cracked wide open by the echoing beat of a woodpeckers beak.

Also, the symbolic meaning of woodpecker deals with progress because she doggedly hammers at her purpose until she sees to the other side of the obstacle. Aries are equally determined in their purpose, often ramming through astounding odds to obtain their goals.

Concepts of determination and drive in the symbolic meaning of woodpecker can be stretched further when we consider the woodpecker’s love for the oak tree. Oak trees are symbolic of stability and strength of character, read more about their meanings here.

Also in Roman myth the woodpecker was noted as befriending the founders of Rome, Romulus and Remus (who, interestingly were fathered by Mars, the god of war). Legend states the both the wolf and the woodpecker fed the twin boys in their infancy while they were sequestered in the wild to avoid demise (as typical Roman myth, it’s a long story, you can read it here). 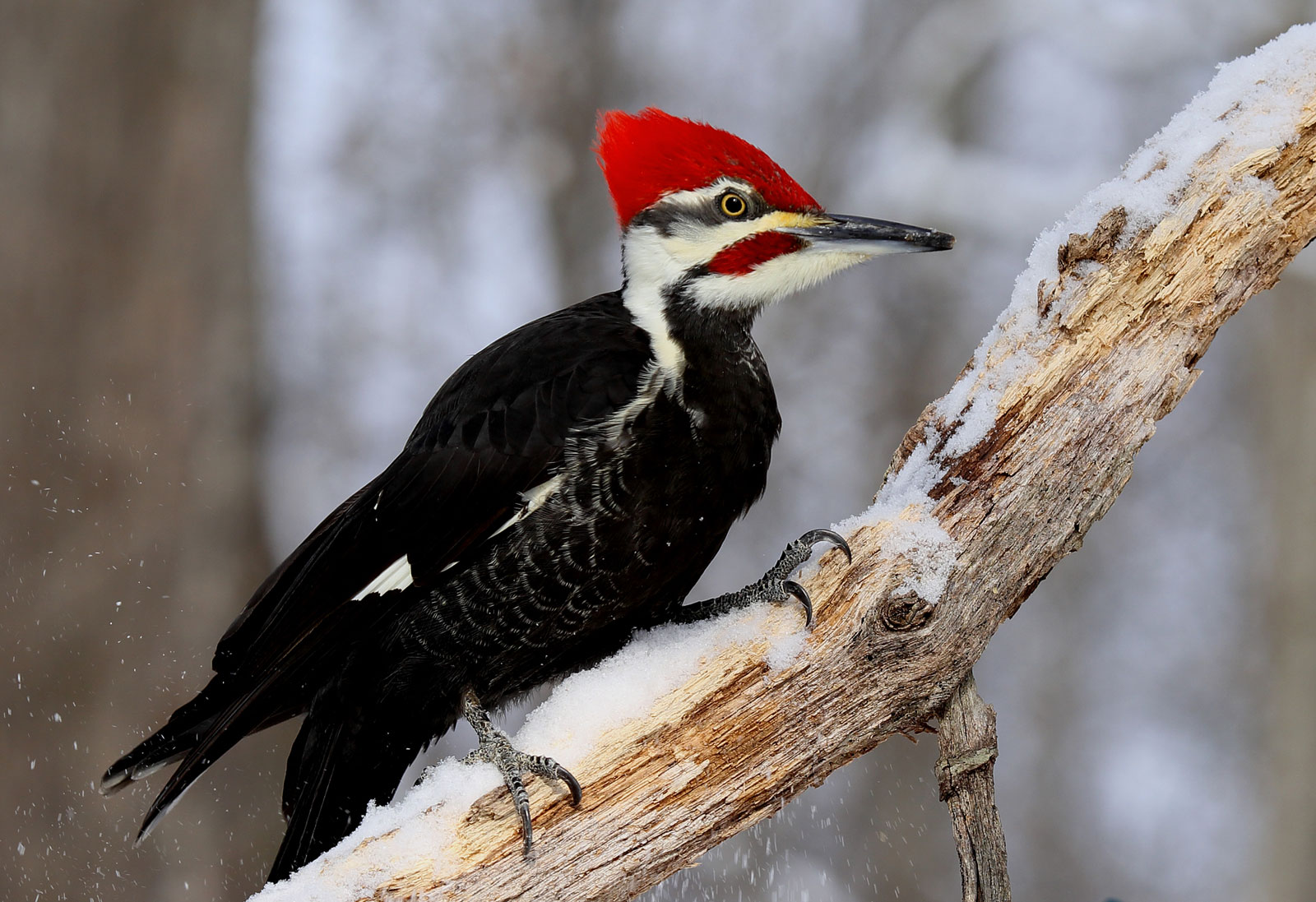 “The woodpecker is the percussion section of the animal kingdom.

They are symbolic of keeping the rhythm of life.”

When the woodpecker comes calling, it may be a sign to take some action. Here are a few suggestions…

Guidance From the Woodpecker

♦  Shelter our wisdom from predatory threat.

♦  Nurture our ideas in the womb of our core passions.

♦  Communicate our ideas in more creative or non-traditional ways.

♦  Stop and consider the opportunities available to us at this time.

♦  Look at projects in unique creative ways to bring new life to a project.

♦  Use our heads (intellect) to think up innovative solutions to overcome barriers.

♦  Listen more clearly to subtle energies, there is a message that only our intuition can interpret.

I hope you have enjoyed these thoughts on the symbolic meaning of woodpecker. Be sure to check out the links at the end of this page formore symbolic meanings of awesome animals and birds. Thanks for reading!

Take Away Tips About Symbolic Meaning of the Woodpecker

Communication is a gift.
Woodpeckers are extremely communicative. They have an array of drumming rhythms that send out messages to their feathered friends. They also vocalize in highly effective ways. When the woodpecker comes into our lives, it’s a good sign to pay attention to how we are expressiving ourselves to others.

Headstrong is the new cool.
Woodpeckers are tough birds. They have strong skulls and hallowed portions of their craniums that allow them to bonk through wood to make homes and get food. The point is: Woodpeckers are determined. We can be too. A big symbolic meaning of woodpecker is about reminding us to be strong when it comes to reaching our goals.

Don’t peck on me! (or my peeps!).
Woodpeckers do NOT tolerate threat. They are very territorial, and they know how to defend themselves. Moreover, they know how to protect their babies. When the woodpecker knocks on your awareness, it’s a good time to consider what it takes to defend what you hold most dear and sacred in your life. 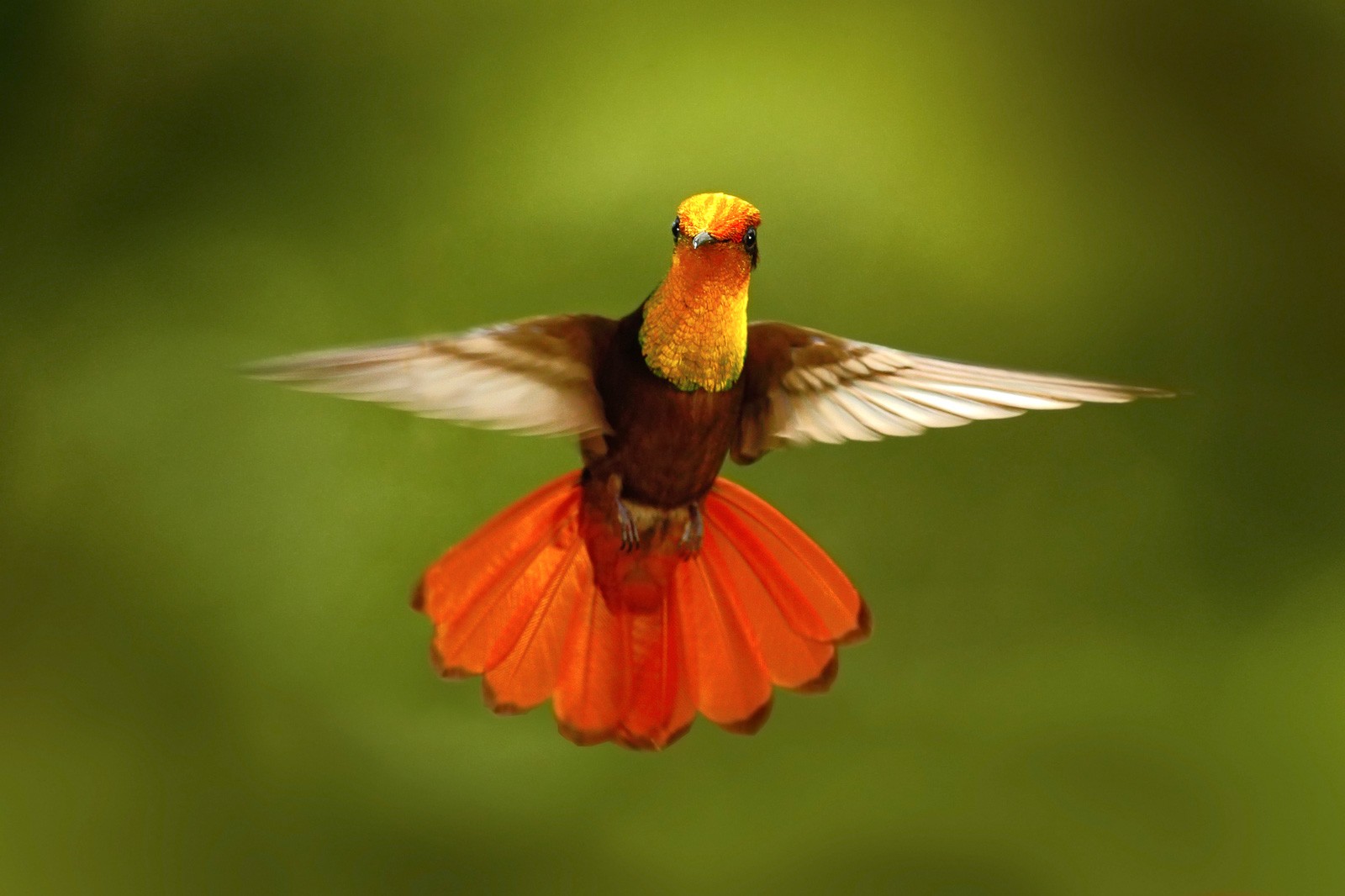 Birds are fantastic messengers and teachers. Paying attention to birds gives us lessons like freedom, protecting family and being resourceful. This article offers a whole list of birds and their meanings. From falcons to finches, check out symbolic bird meanings here.

The Art of Anting: Symbolic Lessons From Crows and Ants