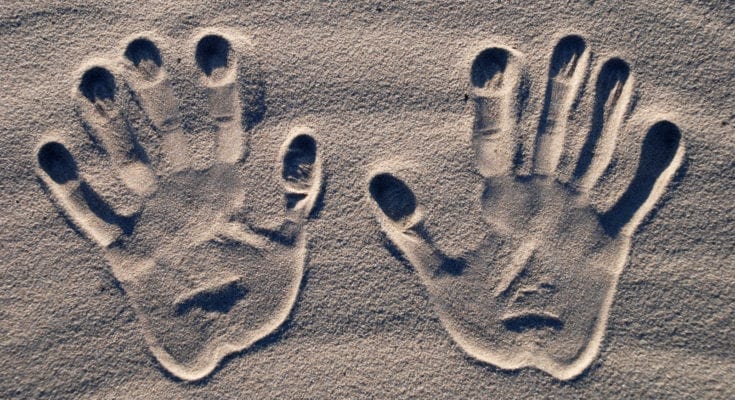 Getting a Grasp on Symbolic Hand Meaning

This page on hand meaning symbolism is brought about by several curious images received during meditation and dreams. And, like much of the content on this site, this post comes from thinking more deeply about potential hand meaning with the goal of providing interesting insight and perspectives to you too.

First and most obvious, we’ve got two of them and this lead me to the concept of number two in numerological symbolism.

In Asian cultures the left hand is symbolic of yin energy and the right yang energy. Hands folded together or clasped in Asian illustrations is iconic of allegiance and friendship. Hidden hands depicted in art indicates humility and offering respect where it is due.

These brief and traditional attributions for hands can prove meaningful in our daily practices. Being mindful of which hand is used (depending on the intent I wish to convey) has manifested some fascinating results. For example, when consoling a friend last week, I purposefully placed my left hand on her shoulder with the intent to transmit an energy of passivity. I wanted to convey nothing more than my presence to her, and my willingness to be an outlet for her emotion. No action – just being there.

Likewise, I mindfully give with my right hand, while receiving with my left. This simple act (or, more accurately, being aware of this act) has reaped some amazing results.

In the Celtic language of symbolism there are references indicating hand meaning in connection to power, rulership, and authority. I infer this from the experience of King Nuada who was dethroned from ruling his kingdom because he lost his right hand in battle.

It was a big deal. Without the hand, a king could be considered incongruent and unbalanced as kings were also judges. Good and balanced judgment was symbolically portrayed by the two hands. Later, however, we learn King Nuada regained his command after one of his daughters gave him a silver hand which was animated by the help of Miach, a sage and healer.

Also in the ancient Celtic way of thinking (and countless others), the hand was symbolic of spiritual power. Further, hands were thought to harbor energetic power as we see invocations by Celtic gods and goddesses as well as Druids.

In the Native American way of symbolic communication, hands dominated in expression where the Plains Indians showcased their most eloquent speech via use of hand gestures.

Consider these little bits about hand meaning as you go about your days, and travel on your Path. Furthermore, I invite you to be mindful of your hands, and how you use them to express yourself and your intent.

♦  Mindfully serve food or give items away with your right hand.

♦  Create your own set of spiritual hand signals signifying your devotion to the Divine.

♦  Get into the Native American mindset and use hands as communicative gestures. This Indian Sign Language Book is a great reference.

♦  Trace your hands on paper and color them in a meditative, free-associative state. Observe what insights come.

♦  Gently press your fingertips together, making a soft connection between both hands with the idea of making an energetic connection on a grand scale. Do this in a relaxed, meditative way and see what happens.

♦  Consider taking a class or researching the symbolism in palmistry.

♦  Try writing with your less-dominant hand and observe what kind thoughts you express.

And also this article: What’s a tarsal?

I hope you enjoyed this page on symbolic hand meaning. Here are a few other pages on this site that may be of interest to you.

It’s been said the eye is the window to the soul, which may explain why the symbolic meaning of eyes tends to be of a spiritual nature. This article discusses the meaning of eyes in various cultures. Get more about symbolic eye meanings here.

Astrology Influences on the Human Body

Body meanings can shed a lot of light on our function, status, and levels of consciousness. Did you know the planets in our Universe are representatives of various parts of our physical bodies? Yep. This article explores how two luminaries (sun and moon) and eight planets affect the human body. Get the whole list and how planets influence the human body here.